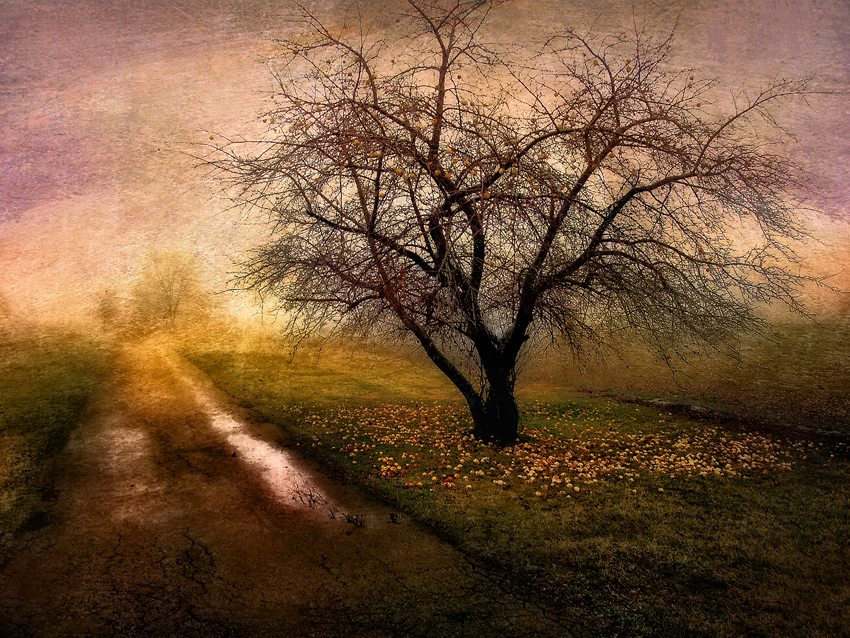 This is great! I really like it. Good composition, great subject and fitting manipulation. If you could share with us a bot what did you do to the photo?

Thanks……..i don’t actually remember alot how i had done it. But it was in the same place as that one of the lane with trees. Same place.

I used a tripod early morning, a little bit of fog was still there. A security guard came along and chased me out! But I had already gotten the photo.

I used the same texture i used on all of them. A close up of some wall paper at my mothers house. Nothing highly unusual, just had intersting texture to it. I used a close up of it because if i didn’t I would have included some letters, and designs in the paper, which i didn’t want.

I was “manufactured” texture in the wall paper, so it already had a nice texture incorporated into it.

I just layered that textured photo over my original apple tree photo in photoshop. Then used a blend mode such as Soft Light or overlay.

After that, i basically erased some areas using different opacity as to no erase some areas entirely….just used my imagination and intuition.

Thanks for sharing your technique. It come out great! It will look very cool as a print on a right paper – definitely matt and maybe textured.

This is a great image that goes way beyond a simple photograph. I love the way you have incorporated
layers to achieve this result! Looking forward to seeing many more examples of your creativity in future posts